Pathfinder Dogs qualified our first two dogs (Bonnie and Clyde) in 2010
We will continue to purchase puppies from reputable breeders who actively support the appropriate health checks and natural, raw wellbeing. We will, in time, start our own breeding programme and adhere to these rigorous standards ourselves. 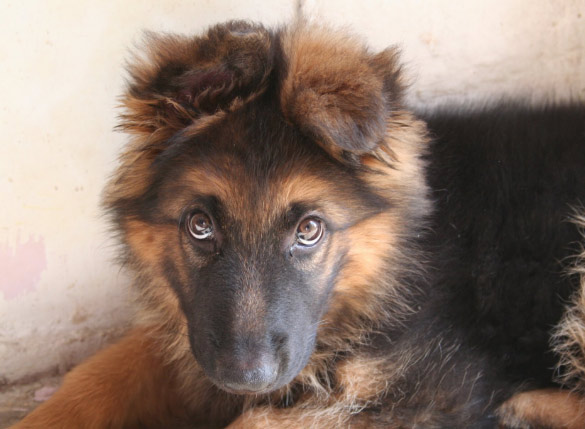 The first guide dog training schools were established in Germany during World War 1, to enhance the mobility of returning veterans who were blinded in combat. The United States followed suit in 1929 with The Seeing Eye in Nashville, Tennessee (relocated in 1931 to Morristown, New Jersey). One of the founders of The Seeing Eye was America’s first guide dog owner, Nashville resident Morris Frank. Frank was trained with Buddy, a German Shepherd in Switzerland in 1928.

Did you know that the first guide dogs in Great Britain were German Shepherds. Three of these first were Judy, Meta, and Folly, who were handed over to their new owners, veterans blinded in World War I, on 6 October 1931. Judy’s new owner was Musgrave Frankland.

So why are Pathfinder Dogs using German Shepherds as guides?

As you’ve read, at one time the German Shepherd Dog was the breed chosen exclusively to be used as a the first guide dog.  In recent years, Labradors and Golden Retrievers have been more widely used for this work, although there are still German Shepherds being trained throughout the world.  Pathfinder Dogs believe the German Shepherd is still the ultimate breed for the job.  A versatile breed, they excel in this field due to their strong sense of duty and strong work ethic, their mental abilities, their fearlessness, and their attachment and loyalty to their owner.

Support Pathfinder Dogs while you shop by using Amazon Smile.

Your donation means the world!

Contact Us
Our Cookie Policy
If your browser settings permit, we have placed cookies on your computer for analytics and other site-improvement purposes. You can give or withdraw consent at any time by changing your cookie settings.
Don't show this message again
X